1. Hungary is a land-locked country in Central Europe sharing its borders with Austria, Croatia, Romania, Serbia, Slovakia, Slovenia and Ukraine. The population of Hungary is 9,919,128.

Here are a few interesting facts about this old country with a very rich history:

3. Hungary was once part of the Celtic world, then the Roman Empire. Following the fall of Rome, the Huns settled in the plains of Pannonia and gave their name to Hungary.

4. Founded in 896, Hungary is one of the oldest countries in Europe (before France and Germany became separate entities, and before the unification of Anglo-Saxon Kingdoms.)

5. Around 1000 CE, the Kingdom of Hungary was one of the largest states in Europe, bigger than France. Later, it became one of the two “eagle heads” of the Austro-Hungarian Empire.

6. Hungarian language is known as Magyar and is the direct descendent of the language spoken by the Huns. It is not an Indo-European language and has only two related languages in Europe (Finnish and Estonian).

7. Around two-thirds of the Hungarian people are Roman Catholic, about a quarter are Calvinist. The rest of the population is either belongs to the Lutheran, Jewish, Greek Orthodox.

9. The 1986 Hungarian Grand Prix was the first Formula One race to take place behind the Iron Curtain.

10. Communism in Hungary ended 1989 and the country became a parliamentary republic. It joined NATO in 1999 and the EU five years later.

11. Inventions by Hungarians in Hungary include the noiseless match (by János Irinyi), Rubik’s cube (by Erno Rubik), and the krypton electric bulb (Imre Bródy).

12.  The spa and the hot springs at the Hotel Gellért - Hungary has one of the most important thermal spring cultures in Europe. The country boasts no less than 1,500 spas, typically featuring Roman, Greek and Turkish architecture. 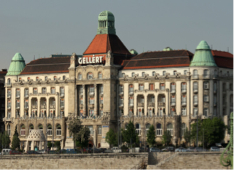 Spa at the Hotel Gellért

13. Hungary has a long tradition of classical music with famous composers like Béla Bartók, Zoltán Kodály and Franz Liszt.

14. As of 2007, 13 Hungarians had received a Nobel Prize (this is more than Japan, China, India, Australia or Spain) in every category except peace.

17. Hungarians won gold medals at every summer Olympics except Antwerp 1920 and Los Angeles 1984 when they did not compete.

18. According to 2013 OECD figures: “As in other Eastern European countries, upper secondary attainment in Hungary is traditionally high (82% for 25-64-year-olds, compared with an OECD average of 75%). This applies across all age groups: 87% of 25-34 year-olds and 75% of 55-64 year-olds hold an upper secondary qualification against an OECD average of 82% and 64%, respectively.

19. Hungary has, together with Sweden and the US, the lowest completion rate at tertiary level among OECD countries: in 2011, only 53% of students graduated from the program they entered, in comparison with the OECD average of 68%.

23. Hungary is also reputed to host cultural events like Sziget Festival or Budapest Spring Festival. The Sziget Festival is the Hungarian for “Island” and is one of the largest music and cultural festivals in Europe. It is held every August in northern Budapest, Hungary, on Óbudai-sziget (“Old Buda Island”), a leafy 108-hectare (266-acre) island on the Danube. The Budapest Spring Festival is one of the country’s oldest festivals and takes place each year in March and attract artists and musicians from around the world. 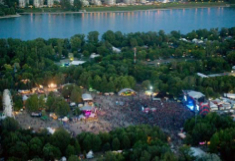 24. Did you know there are cowboys in Hungary?  Csikós as they are called in the region show off their ability on horseback. Horsemanship in Hungary has a long history, going back to the Magyars, the first Hungarians. They rode from central Asia to settle in present day Hungary. The tradition is best seen on the Great Plain (Puszta), a vast flat plain reminiscent of the American Old West.

25. And no post on Hungary is complete, without mention of its famously delicious and flavorful Gulyásleves (gulyás is herdsman, leves is soup in Hungarian); a Hungarian soup, made of beef, vegetables, ground paprika and other spices. It originates from a dish cooked by the cattlemen (gulyás also means herdsman) who tended their herds in the Great Hungarian Plain, known as the Alföld or Puszta in Hungarian. Egészségedre (enjoy)! 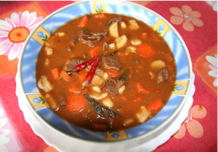